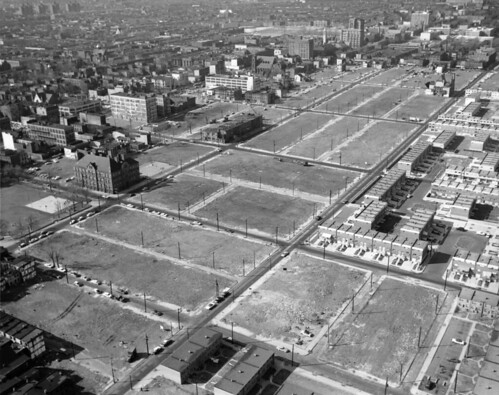 In 1959, Yorktown, the neighborhood directly south of Main Campus, did not exist.

Not only did it not exist, nothing stood in its place. The area, which spans from Girard to Cecil B. Moore Avenues, and from 11th to Broad Streets, was nothing but a bizarre clearing of dust and telephone poles in the expanse of central North Philadelphia. Ten years later, it was a vibrant middle-class neighborhood, with the sinew of a small town, and the adoration of Philadelphia’s mayor.

The median income had more than tripled. The slum that had existed there before was nowhere to be seen. In its place stood boulevards, grassy lawns, and quiet streets. Not everyone was thrilled, however.

In order to create this oasis, the city took the 153-acre section by eminent domain, and sent several thousand people packing. More than 2,000 families, 1,000 more individuals, and almost 400 businesses were forced to relocate in order to give Yorktown life, according to a Dec. 14, 1969 article in the Sunday Bulletin. Some felt that the surrounding neighborhoods suffered because of these evictions.

“There were no relocation plans for the people and they didn’t know what to do,” a resident named Marvin Louis told the Bulletin afterwards. “So the [developers] bought up the land and the residents were given a certain amount of time to move out.”

Louis, at that time the president of the Ludlow Community Association, was quoted in multiple articles criticizing both the city and Yorktown residents for the way the build-up was carried out and the behavior of the community members themselves.

“Everyone who was pushed out couldn’t afford the mortgages, and there was also a lot of red-lining back then,” said Dr. Anthony Monteiro, associate director of the Institute for the Study of Race and Social Thought at Temple University, where he is also a professor of African-American history. As a young child, Monteiro lived in what was to become Yorktown. His grandmother was one of the residents forced out by the city in the late 1950s.Monteiro also believes there was another force at work in the creation and success of Yorktown, which has been predominantly black since its creation.

“Philadelphia has always been a segregated city,” he said. “This was a way to ease the demand to desegregate neighborhoods.”The black middle class was making gains in jobs and social mobility, and was beginning to move out into the suburbs and Northeast Philadelphia, which at that time were predominantly white.

“When Yorktown was built, it gave the black working and middle classes a nice neighborhood to live in,” Monteiro said. More importantly, a neighborhood that did not have whites living in it.

Yorktown has been largely successful thus far in keeping its working class character. This may not be the case for much longer.

“The real question is, will Yorktown be gentrified,” Monteiro said. With expansion from Center City from the south, and more immediately, Temple University to the north, gentrification may not be out of the question.

“We are not worried about that,” said Pam Pendleton-Smith, a Yorktown resident and member of the Yorktown Community Association. “The important thing is that it does not become an area that caters to transient tenancy. We want the owners to have a vested interest in the neighborhood.”

Transient tenancy, code for university students and anyone else who lives in an area for only a few years, has been a problem in Yorktown since 2000, Smith said. In that year, George Vasquez Jr., a then-employee of Temple University Health Sciences Center, bought a house in Yorktown. Instead of living there, however, he renovated it and rented it out to students. It is from this genesis that Yorktown began being inhabited by students. Many residents will tell you that it’s patently illegal.

City code stipulates that Yorktown homes host only single families. A family is defined as relation through blood, marriage, or adoption, or as fewer than four unrelated persons. If the people living in that home do not meet that definition, it is in violation of city code, also known as illegal.The mistake here would be to demonize Vasquez. He was simply taking advantage of a business opportunity. He was hardly the first, and certainly won’t be the last, to ignore city codes.

With any controversy, there are a few misconceptions that play into the animosity. Yorktown and Temple are no different.As evidenced by a short film made by University of Pennsylvania students, available on Yorktown’s Community Association Web site, some in Yorktown believe that Temple began buying up the homes for students. This is a misconception, one that comes from the fact that Vasquez was a Temple employee.

In reality, Vasquez has flipped houses and rented them out all over the city, and his Yorktown purchase was just another private business venture.

Another mistake would be to assume that there has always been tension between Temple and Yorktown. This is simply not the case.

“For as long as there has been Yorktown, there have been Temple students living here,” Smith said. “It was never a problem until absentee landlords began buying houses.”

This occurred first in 2000 with Vasquez. Then, instead of a student living in a house inhabited by empty-nesters, there were five or six students by themselves.As a result of the YCA’s actions, Temple has agreed to stop advertising Yorktown houses on their off-campus housing list.

The importance of Yorktown’s history lies in Temple’s future. With several hundred more freshmen in 2007 than in 2006, and with the influx of the Tyler School of Art, students will move into the neighborhoods surrounding Main Campus in droves. Understanding those neighborhoods is critical to ensuring that the expansion will be benign and well-received on both sides.

Stephen Zook can be reached at stephen.zook@temple.edu.See other Community Visions columns here.

TSG to hold second forum on stadium with community

TSG will continue to oppose a stadium if it has a negative impact on the North Philadelphia community.

Students await the reopening of Progress Plaza, but the delays are frustrating.

Students from Philadelphia discuss feeling out of place in their home city on Main Campus.