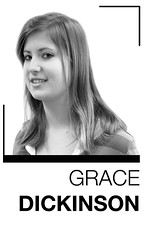 In 2006, more than 500 new energy drink products hit shelves worldwide.  People are choosing these drinks as pick-me-ups and also mixing them with alcohol.

“People come in here and order alcohol mixed with energy drinks too often to count,” said Pete Borgmann, a bartender from Maxi’s.

College students are major contributors toward this rising trend.

Diaz said he mixes energy drinks with alcohol because of the taste and the extra buzz the combination causes.  However, he said he has never been informed of the risks this combination may pose.

Diaz and many other students who make or order these drinks are unaware of the health risks caused by mixing the two beverages. Energy drinks contain stimulants, including caffeine, ginseng and taurine, an amino acid, which poses a problem when mixed with alcohol, a depressant.

According to the National Institutes of Health, caffeine increases heart rates and blood pressure, which can cause heart palpitations.  When mixed with alcohol, the risk of heart problems is amplified.

Also, both alcohol and energy drinks contribute to dehydration, which can prevent the body from efficiently metabolizing the alcohol, increasing its toxicity and causing a hangover.

The stimulants in energy drinks often disguise how intoxicated an individual feels and prevent the recognition of how much alcohol has been consumed.  Fatigue, one warning sign that tells the body it has had enough to drink, is masked by caffeine and other stimulants.

Borgmann said he was never informed of any of these risks during his training in becoming a bartender.
Energy drink companies, including Red Bull, fail to place warnings of the risks of combining alcohol and stimulants on their packaging.  Students, bartenders and others are left unaware as they mix their Friday night cocktails.

Whether this trend will stick around or not has yet to be seen.

“I think this is just a fad that will fade and is primarily a concern because it is part of the bigger issue of underage and/or excessive drinking,” said Paul Lyons, an associate professor of family and community medicine.

Students should be cautious when mixing energy drinks and alcohol. Consumers need to be aware of the negative effects from the mixture. Better yet, avoiding this combination altogether can help save someone from alcohol poisoning or a looming hangover the day after drinking.

Grace Dickinson can be reached at grace.dickinson@temple.edu.

One of three reported sex assaults this semester involved alcohol.

After crackdown, CSS steps back

The number of alcohol arrests was cut in half in the past two weekends.