As a general rule, males between the ages of 18 and 34 do not purchase a particularly large number of books dispensing advice on the topics of romance and relationships.

Whether this trend stems from some actual sort of aversion to the subject or is simply an extension of the stereotypical male unwillingness to stop and ask for directions is beyond the scope of this review.
Ask a friend in the sociology department for a sensitive and textured answer to that one.

What this review will seek to address is why any publisher in their right mind would willfully disregard this knowledge and release just such a book, targeted specifically at the 18 to 34 demographic – and how the result, Things I’ve Learned From Women Who’ve Dumped Me, could wind up being so good.
To start with, let us consider the editor: Ben Karlin, former executive producer of The Daily Show with Jon Stewart, co-creator of The Colbert Report, and editor of the Onion. His literary credits include co-authorship of America (The Book). He is, in short, one of the funniest men in America – that, and a talented editor. 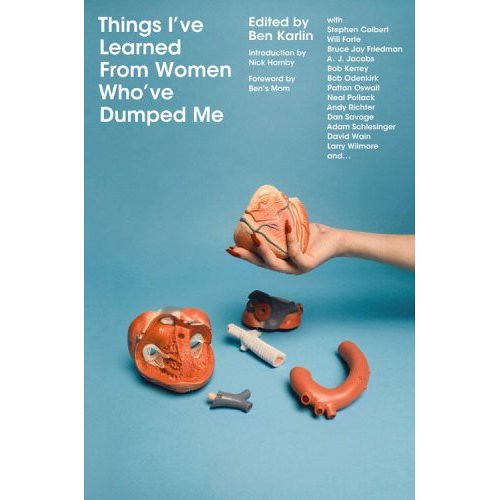 In addition to Karlin, the contributors to Things I’ve Learned include some of the best and brightest minds from the contemporary humor scene – as well as a couple of other genuinely bright minds thrown in from a smattering of other professions. Writers from Saturday Night Live, The Late Show with David Letterman, Esquire, the New York Times and a host of films, both high- and low-brow; former United States senators; award-winning actors, authors and college professors; Stephen Colbert himself; Ben Karlin’s mom – the list goes on.

Things I’ve Learned features 46 lessons learned the hard way. The advice dispensed by the contributing luminaries ranges from the fairly simple (Lesson No. 14: “I am a gay man”) to the relatively profound (Lesson No. 41: “Dating a stripper is a recipe for perspective”). Contributions appear in the form of essays, cartoons, scripts and even a two-and-a-half-minute pop song, and the word “woman” is taken to mean everything from cat to baby to  daughter to man. And whether the writers take aim at poignancy or hilarity, most hit their targets head-on (a tribute to Karlin’s talents as an anthologist as much as to any of the individual contributors).

Many of the men I know have, essentially, no clear idea as to how they ever managed to stumble their way into successful relationships. How the wonderful young woman I’m currently dating was ever conned into winding up with me is a mystery far beyond my meager powers of reason to even come close to solving, and I highly doubt my ability to repeat the trick.

And while Things I’ve Learned From Women Who’ve Dumped Me may not have served to shed any significant light on the subject, it at least left me able to laugh off my ignorance. As the Onion editor Todd Hanson puts it in his contribution, “Guys who claim to understand everything about women are like Kansas school boards that claim to understand everything about the creation of the world – interesting from a sociological perspective maybe, but still, totally full of s–t.”