It was a question from a Temple student to Al Golden that forced the fourth-year coach to recall what almost was for his football team last year. 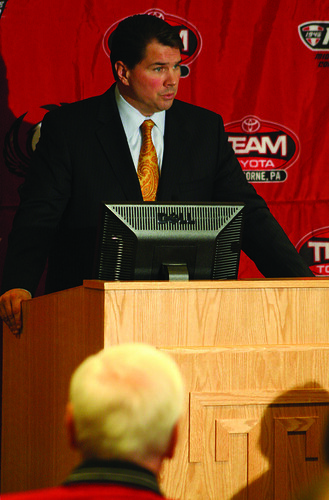 Al Golden stands at the podium in Rm. 200 of the Student Center during Wednesday’s press conference announcing the latest freshmen (Nic Lukehart/TTN).

“Were you bored last year?” Golden responded to the student who asked what the fan base should expect from the Owls when they get back to Lincoln Financial Field in the fall.

“You can dwell on that and be really sad about that, or you can be really encouraged,” Golden said.
Golden chose the latter as he introduced Temple’s 2009 recruiting class last Wednesday afternoon in the Student Center in front of television cameras, media, students and alumni.

“This is a big day for us. This represents our best class,” Golden said of his 28 recruits, 25 of whom come from within a radius of three hours or less.

The Owls were winners in the excitement department last season – losing five games by a combined total of just nine points in regulation. The ability to close out games and knock down a Hail Mary here or there could have had the Owls making a trip to a bowl game, representing the Mid-American Conference instead of a 5-7 record that left a bad taste in their mouths.

The day also marked the first time in Golden’s tenure at Temple that his program has a full scholarship allotment of 85.

“It marks a return to Division I football,” Golden said. “Our coaches, our staff have done a tremendous job putting this class together. It’s a class of character.

“This is the most talented class we’ve had. If you want to be a big, powerful, strong team you have to recruit that way,” he added.

With the first spring practice for the Owls exactly five weeks away and the annual Cherry and White game a month after that, there are a few issues that Golden and his staff want cleared up by the time the Owls hit the field.

Quarterback
Adam DiMichele’s time as an Owl is over. He finished his senior season with 18 passing touchdowns and 45 overall during his career, during which he played in only 18 games due to various injuries.

With DiMichele and senior wide receiver Bruce Francis graduating, Golden is now looking for a permanent quarterback for the future.

Charlton, who replaced the oft-injured DiMichele in 2006 and 2007, threw for five touchdowns and three interceptions in five games.

Stewart filled in when DiMichele went down last season and had his peaks and valleys. In his first collegiate action, he threw three interceptions at Penn State. But, two weeks later, he responded with three touchdowns in a win over Miami (Ohio).

Charlton and Stewart will have company, as incoming freshman Chris Coyer will join the competition. Golden said the Vienna, Va., quarterback runs very well, makes good decisions and can create in the pocket.

“Everybody has an opportunity to fight for that job,” Golden said. “The situation now with three scholarship quarterbacks creates more reps for Coyer. It’s a great opportunity for him. Sometimes that’s all you need is an opportunity.”

Kicking
There were two instances last year when three points would have made the difference in the outcome.
Redshirt junior kicker Jake Brownell missed one in a two-point loss to Buffalo and two more in a 7-3 defeat by Western Michigan. There was talk throughout the year about Brownell’s confidence, and Golden was publicly frustrated with the kicking game.

This season, Golden has brought in some competition for Brownell in hopes of sparking the veteran kicker or possibly allowing new blood to take over the job.

Incoming freshman Brandon McManus, who played high school ball in Hatfield, Pa., will be given the chance to beat out Brownell and earn the starting job in his first season on campus.

“There’s going to be competition there,” Golden said. “We expect him to be a kid fighting for a starting job in August.”

Offensive Line
Senior center Alex Derenthal is the only member of last year’s starting unit who won’t be returning. That leaves Golden with four starters from last year who will pick up where they left off.

Even better – they are all underclassmen. Colin Madison, Wayne Tribue and Derek Dennis head a line that averages more than 300 pounds.

“The thing I am excited about is that everybody is young,” Golden said. “They look how we want them to look around here.”

However, it is still a unit that Golden wants to continue to build on. After signing five linemen in this class, Golden feels that “we need just one more group [of recruits].”

All in all, it seems Golden is satisfied with the class that he introduced and is ready to hit the ground running this spring. The Owls still have a very young roster, and in addition to a strong recruiting class, Golden said his team “can’t wait to get back out there.”

“I like where we’re situated moving forward,” he said.

Looking for leaders this spring season

Coach Al Golden will focus on intangibles during Spring Practice with the departure of the football team’s seniors.