Anarchists dressed in all black march toward downtown Pittsburgh
Saturday, Sept. 26 in protest of the G20 summit taking place.

Commencing from a small neighborhood park, The People’s Uprising, one of many groups protesting the G20 Summit in Pittsburgh, brought together hundreds of people to express their sentiments of disapproval against a myriad of issues. 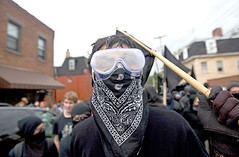 These issues, discussed during the group of 20’s meeting range from the climate to the economy.

Bringing together groups of people, including anarchists dressed completely in black, the city was well prepared, having brought in about as many police officers as there were protestors. While tear gas and riot sirens were employed, it was a relatively non-violent.

Volleyball loses to Pittsburgh and New Mexico, but sweeps Morgan State. The women’s volleyball team wrapped up its non-conference schedule this weekend at the Pitt Blue and Gold Classic, going 1-2 in three games. The

A freshman received assistance through GoFundMe to pay for her housing.

Sophomore Whitney King coached in high school and volunteered at a Special Olympics event as a freshman.