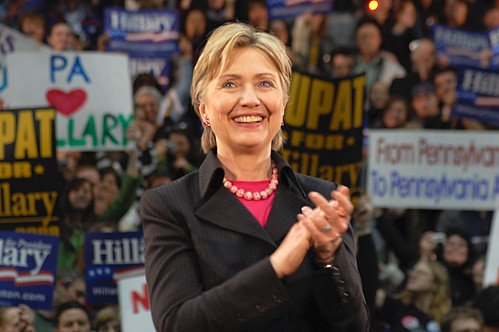 Across Pennsylvania college and university campuses, political momentum has been picking up.

On Friday, Sen. Hillary Clinton addressed a crowd of 1,000, mostly college-aged supporters and voters on the campus of Drexel University.

“Sen. Clinton understands certain things about this country,” Nutter said. “Now is the time and Philly is the place to discuss urban issues in this campaign.”

Both Clinton and her rival, Sen. Barack Obama, have aggressively targeted college voters.

At Drexel, Clinton tried to reach out to young voters by outlining her plans for lowering college costs and interest rates.
“Young people – I want them to feel their president cares about their future,” Clinton said. “This isn’t about the next election, it’s about the next generation.”

Clinton also used the rally to discuss comments Obama made earlier in the week about Pennsylvanians.

Obama was quoted as saying, “You go into these small towns in Pennsylvania and, like a lot of small towns in the Midwest, the jobs have been gone now for 25 years and nothing’s replaced them… And it’s not surprising then they get bitter, they cling to guns or religion or antipathy to people who aren’t like them or anti-immigrant sentiment or anti-trade sentiment as a way to explain their frustrations.”

Clinton defended Pennsylvania voters and said the people she has met are not bitter, but hard-working and
resilient.

According to a Temple poll, Clinton leads Obama 44 percent to 35 percent among Pennsylvanians likely to vote in the April 22 Democratic primary.  Nineteen percent remained undecided, but the poll projects that those voters are more likely to choose Obama.
University of Pennsylvania student Jae Bang, 20, attended the Clinton rally at Drexel. He said he is still undecided.

“I think I’m more of an Obama fan. I’m in between,” Bang said. “I really liked [Clinton’s speech]. It was more constructive than I thought it’d be.”

The Temple poll also suggests that supporters of both candidates are motivated to vote for different reasons.

Pennsylvania is predicted to be a crucial state in the race for the Democratic presidential nomination.

The push to get college students to vote is clear. And they, along with the rest of Pennsylvania residents, will have the chance to do so in just one week.

It took three attacks and a funeral to increase security on Philadelphia’s sole public transportation system. The subway attacks of March 26, April 2 and April 4 occurred within blocks of each other – some