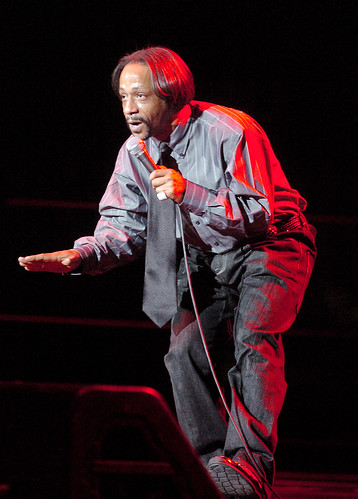 Every stand-up comedian reaches a point when they just can’t seem to connect with the audience anymore. This fate is known as the “comedic wall.”

Katt Micah Williams, a 34-year-old stand-up comedian, actor and rapper, showed just how high he can hurdle over that “comedic wall” when he performed at the Liacouras Center last Friday night during his It’s Pimpin’ Pimpin’ tour.

Williams, who was the second highest-grossing comedian in 2007, attracted a nearly sold-out crowd to the North Philadelphia venue. As spectators watched to see if Williams could avoid stumbling over the “comedic wall,” he did what he has consistently done in the past — he sailed clear over it.

He kept the audience in laughter throughout his entire act, especially with jokes about politics, drugs and other anecdotes. He even made a joke about Philadelphia Mayor Michael Nutter.

His recent visit to Philly was quite different than when came here several years ago as a less successful comedian.

“When I was coming to Philly initially, I would come here and do jokes and I’d get paid, like, $150 for doing four nights of shows,” Williams said.

His struggle and hustle in the beginning of his career help him relate to audiences.

“People want to hear from somebody who [has] already been on the track,” Williams said.

With two highly regarded comedy specials already under his belt – The Pimp Chronicles Pt. 1 in 2006 and its sequel, American Hustle, in 2007 – and a third on the way, Katt doesn’t seem too concerned with any barriers right now.

“I’m a hurdler, so I don’t look at the wall the same way that other people look at the wall,” Williams said. “I’m trying to figure out what’s on the other side of the wall.”

After finishing the successful Pimp Chronicles Tour in 2007, Williams could have laid low and let his success sink in. Instead, he embarked on the 15-city American Hustle tour, which ran from October to November 2007, and then on this year’s It’s Pimpin’ Pimpin’ tour.

“It’s a new age and a new time,” Williams said about his back-to-back tours and specials. “People want it quick, and people want it thorough.”

Williams said he knows what he achieved in 2007 and what he could potentially achieve in 2008, but he tries not think about how famous he may actually become.

“For the last six months, I’ve been in a cocoon,” Williams said.

Focusing too much on fame can lead to a lack of concentration for a stand-up comedian.

There are other noteworthy stand-up comedians before Williams’ run who have hit the “comedic wall,” particularly Eddie Murphy, who stopped doing stand-up after a prominent run in the ’80s.

“For some people, that wall is what’s supposed to happen. The wall is supposed to catch most people,” Williams said. “That’s what the wall is there for. To stop progress.”

Progression is not a destitute aspect of Katt’s career right now. Since 2001, he has been climbing that “success ladder.”

His addiction to laughter is what makes him seek out comedic excellence. For Williams, applause is his drug of choice.

“I got to get the same high every time,” he said. “I got to get it and I’m never happy till I get it perfect.”

On Friday night, Williams reached for perfection once again.

When he arrived on stage, there was not a “wall” in sight. There was just a sign of withdrawal.

But within minutes, he found the drug that he is constantly seeking – laughter and applause.

“As soon as I get it,” Williams said, “then I’m ready to come down and go back up again, just like any other drug.”

Ron Davis can be reached at rmdavis@temple.edu.

President Ann Weaver Hart signed the American College & University Presidents Climate Commitment at a ceremony held in Mitten Hall yesterday. In signing, Temple joins 521 other colleges and universities across the country that have

Satellite election offices altered their hours to accommodate ballot applications, but voters must be in line by 5 p.m. to request a mail-in ballot.

I am hesitant to say that this is even old news because it wasn’t really ever news in the first place. Last week, Hall and Oates played at Temple – but they played separately. Oates got