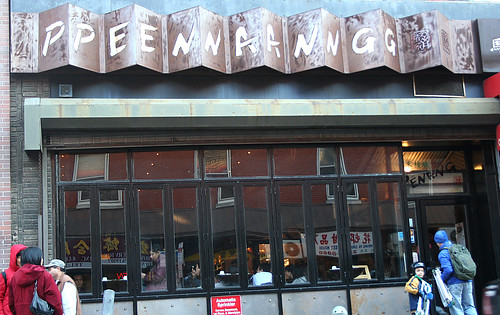 Just beyond the welcome arch into Chinatown stands an establishment that receives the patronage of the Malaysian enclave and Philadelphian foodies alike.

Located at 117 N. 10th St., Penang invites you to sample their modernized yet strikingly authentic menu. Selections range from tailored choices for people unfamiliar with traditional Malaysian food to bolder options with the intriguing caption, “See server first before ordering!”

Many influences comprise the make-up of Malaysian cuisine. India and China have had the biggest impact on Malaysian foods. Rice is a staple in Malaysian diets, along with rice vermicelli, a type of noodle that is served as a backdrop. A variety of peanut sauces and curry gravies also pervade Malaysian dishes.

My guest and I called the restaurant to reserve a table because we know it is always busy on the weekends. The receptionist was friendly and spoke clearly in spite of bustling in the background. When we arrived, we were promptly seated and water and tea were on the table within the first three minutes.

At first glance, the menu can be a bit overwhelming – each page is packed with worthy selections. These include every season of meat and vegetable dishes, along with multiple permutations of noodle, rice, soup and tofu concoctions.

We ordered two appetizers and one entrée: Homemade Roti Canai ($3), Satay Tofu ($5) and the Penang Curry Fish Head Soup ($16). The Roti Canai is a humble piece: the doughy wrapping bread, like thin pita, was lightly grilled and served with a side of mild and sweet curry, submerged chicken and potato cuts.

The curry gravy had a medium consistency with a sweetened chicken flavoring that was softened by the potatoes. The Satay Tofu consisted of four tofu pouches filled with thinly sliced cucumber and a sweet, gooey peanut sauce. The tofu was lightly fried and soaked up the some of the oils from the peanut sauce. Meanwhile, the coolness of the cucumber was like a palate cleanser, creating a fresh provisioning of flavor with each bite.

Next to arrive was our Penang Fish Head soup. A large bowl sat in front of us, swirling with smells and colors. At the bottom dwelled the massive head of a tilefish. The broth contained cayenne, black pepper oil and an indistinguishable curry spice, along with okra, green peppers, white onions and slices of acorn squash, all of which maintained a firm integrity.

In general, the broth was on the oily side, probably from the fish head, the meat of which was bold in flavor and challenged the appreciation of my palate. But the dish made sense: lots of spice, bulky vegetables and bold fish flavors created a meal exploding with earthy notes and delectable juices.

Our dessert was Chendol ($3): a mound of shaved ice embedded with several tiers of flavor: coconut milk, sweet red beans and green bean flour stripes. The latter were tiny worm-like pastes that diversified the textures into a unique blend of elements. It was the kind of dessert that you can’t stop eating.

Penang’s alcohol selection is limited to beer and wine, but they do offer an exciting selection of specialty coffee and tea drinks. For a nice after-dinner treat, be sure to try the Thai iced tea.
I’ve been to Penang on several occasions and was never really wowed by the service. That’s not to say it was spotty or forgetful – hardly. It was always executed in a clockwork fashion that made me feel secure enough to carry on without worrying about being serviced.

Unfortunately, there just wasn’t that personal touch that is expected in most American establishments. A restaurant can run successfully without it, but then the food and atmosphere are the only elements that the customer considers when deciding whether or not to return.

During this particular visit to Penang, however, every need was accommodated with sincerity and thoughtfulness. We were attended to by four different servers that evening. Our water glasses were always filled, our food came out quickly yet was strategically spaced so as to not clutter the table, and we were promptly asked after each dish if everything was to our liking.

In this instance, the “personal touch” was not fostered by empty gestures to flatter the customer’s experience – instead, service was generously provided with a kind attentiveness and a dignified humility.

Aaron Stella can be reached at aaron.stella@temple.edu.