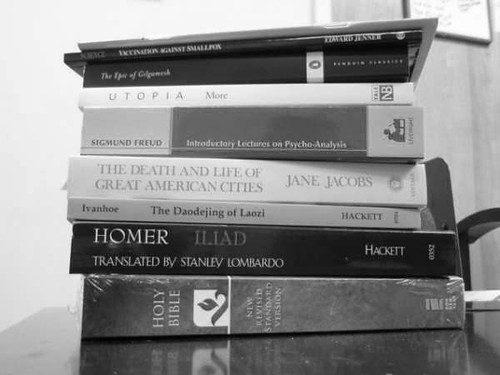 The General Education Executive Committee announced last spring that the intellectual heritage program would be revamped for the first time in more than 25 years.

The instructions from the GEEC mandated that the new curriculum be constructed around themes, as opposed to chronology, consist of fewer required texts and be more diverse.

IH will complete the transition this fall semester to the new program, now called Mosaic.

At the end of last spring, IH director Istvan Varkonyi appointed eight faculty members and one undergraduate student to formulate a proposal within a teaching circle throughout the summer. The members devoted their summer months to reading, writing, researching and meeting with each other in order to formulate a comprehensive curriculum for Mosaic.

Various suggestions were made regarding the texts, pedagogy and overall structure of the program. At the end of the summer, the members submitted a proposal of all their suggestions to Varkonyi. He then conducted five departmental meetings during the fall semester to get feedback from other faculty members. Over winter break, Varkonyi formatted a proposal to GEEC, which was approved in February.

Dan Touey, an adjunct IH professor, called the transition to the new program a sham. He said that the final proposal drew upon the ideas of only a few faculty members, as opposed to the collective.

Touey did not participate in the department meetings, but said he never thought GEEC would approve the course. After it was approved, however, Touey began a discussion via the IH faculty listserv in which he expressed his concerns about Mosaic.
“I was shocked when the course was approved,” Touey said. “I thought the course needed a lot more work, and I thought the department would be told so. I don’t think it’s worthy of the students.”

“It’s a really long process which has only begun,” said Grant Ward, associate director of the IH department. “We recognize that this is only a starting point.”

Mosaic will cover eight units throughout the two-semester program. Each unit requires one text and a supplemental text to be chosen by the professor from a set list.

Touey said he thinks the course is not teachable because of the lack of unity and relation between the texts, as well as the overall difficulty level of the texts. Most of the texts are too advanced for a lower level undergraduate course, Touey said.

“Some of them would only be proper for an advanced undergraduate course,” Touey said. “I think they’re out of place in a general education course.”

“It seems like they have completely gotten rid of the units which were important to the education of the students,” junior architecture major Samantha Perdick said. “What happened to the aesthetics unit? Why aren’t students required to read the Koran any more? I don’t really understand the importance of some of these texts in relation to the overall goal of Mosaic.”

Touey continued to post his concerns on the listserv along with a number of other faculty members. Varkonyi did not respond to the e-mails on the listserv or those sent to him personally. He then sent an e-mail instructing faculty to “not clog the list with messages” to which Touey issued a rebuttal.

“I regard this as a blatant attempt to silence criticism of the new Mosaic course. It is also a violation of the commitment that we have to free speech at this university,” Touey said. “Whenever any member of the university community is silenced, be it student or teacher, that is a threat to the integrity of the university itself.”

“The university has approved this curriculum,” Varkonyi said. “We have to go forward.”

“I’m really disheartened to hear that faculty members are being silenced,” sophomore psychology major Cana Sarnes said. “After all, they know the students best. The course has been approved, but not by the people teaching it.”

Touey said he did not think it was right that faculty members with serious concerns were being treated with disdain.

“It’s utterly ridiculous in an academic setting,” Touey said. “To shut down a serious conversation is absurd. It’s unprecedented that one colleague would try to silence another.”

Shortly thereafter, Touey and one other unnamed faculty were removed from the listserv without notification. Varkonyi then informed Touey that he had violated Temple’s Rule of Conduct C.3 Disruptive and/or Disorderly Conduct section A, which includes, “Engaging in any unruly, erratic or undisciplined behavior that does/may disrupt the workplace.” Varkonyi refused to comment on the violation of the Rule of Conduct.

The IH department consists of non-tenure track faculty who hold one-year contracts, which are renewed on an annual basis, as well as adjuncts. Many of these faculty members have remained silent on these issues due to job security precautions.

“This creates a situation in which if there is reason to criticize what’s going on, there is more of a motivation to stay silent because you don’t have tenure and the director has hiring power,” Touey said.

“I can’t teach the course the way it’s set up,” Touey said. “I wish I could. I love teaching at Temple. I’ve never enjoyed teaching anywhere more. Ideally, I’d like to teach Mosaic, but I don’t have faith in the course.”

Kathryn A. López can be reached at kathryn.lopez@temple.edu.

Imagine a nice spring day. The sun is shining, the birds are singing, you’re walking around campus looking for something else to do besides going to class or doing work, and then it pops into

Freefall continues as season winds down

This time last year, the softball team was preparing to wrap up their regular season and face fifth-seeded Charlotte in the first round of the Atlantic Ten Conference Tournament. The fourth-seeded Owls beat the 49ers,