Only a few days after Einstein Bros. Bagels replaced Taco Bell in the Student Center food court on March 17, the franchise became the No. 2 best-selling venue in the food court among all others to date, selling 230 breakfast sandwiches in one day.

“Charleston Market has always been No. 1, but Einstein is actually competing, and not many other venues do that,” said food court manager Daniel Callan.
Einstein Bros. Bagels provides its customers with a variety of choices, including omelets, deli sandwiches and bagels. In addition to coffee, there is the option of having a frozen blended drink. Or for a quick treat, customers can choose from several snacks available on the service counter
.
“I feel that Einstein is a tad bit healthier,” freshman psychology and photography double major Alyssa Forgione said. “I’m not in this line because it’s the new fad. I just like bagels.”
Despite overwhelmingly long lines that sometimes expand as far back as Jump! Asian Express, the average ticket time is two minutes, which is way above Einstein’s standards, Callan said.

Some students prefer – as an alternative to waiting in line – to choose from one of Einstein Bros. Bagels readymade meals or drinks. The readymade shelves hold everything from sandwiches to fruit cups and are constantly refilled due to the high volume of costumers. 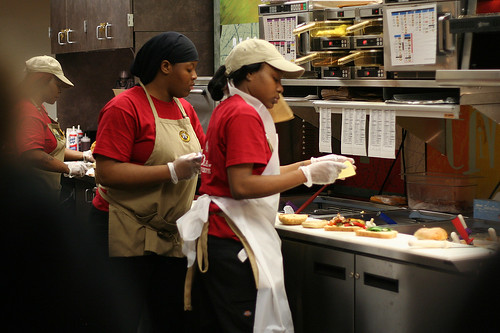 Like many other venues in the food court, employees of Einstein Bros. Bagels had to go through a training process prior to the opening of the store. Dressed in work uniforms, several employees scurried around the kitchen area. Some toasted bagels, others made sandwiches and all remained focused, even with the sound of hungry students shuffling around in the background.

“Training was intense,” Callan said. “A corporate employee from Colorado came. Five days, eight hours of training. The goal is to get Einstein’s style of service right, consistent and quick as possible.”

However, not all students see the Einstein vision, and some are not happy with the new option of eating.

“I feel Einstein is over-priced, and its food tastes like Dunkin’ Donuts,” said junior psychology major Chris Jaggon. “They should bring Taco Bell back.”

While many students favored Taco Bell’s fast food menu, a decline in popularity caused the store to close at the end of fall semester. Some attribute this to the announcement from the Food and Drug Administration and the U.S. Department of Agriculture that attributed 62 confirmed cases of E. coli to lettuce at select Taco Bells.

“My friend’s mom died of E. coli,” freshman Cindy McCready said. “After that, I only ate it a couple of times and I got a bean burrito. I wouldn’t eat the meat.”

Although the Taco Bell previously located in the Valaida S. Walker Dining Court didn’t have an E. coli problem, the outbreak affected the business at various Taco Bells all over the country.

To replace Taco Bell, the Food Court added Dos Manos, a venue that offers Tex-Mex options. Its menu will eventually exp and to have even more products like Taco Bell, but at a higher quality, Callan said.

Currently, Einstein Bros. Bagels employs only four students. However, the company is trying to hire more students because of their flexible schedules. The rest of the employees are local Sodexo employees.

“You are still able to get a great meal for the meal plan price,” he said. “It’s a different quality to attract everyone.”

Keisha Frazier can be reached at keisha.frazier@temple.edu.

A cool wind whispered along the field as sophomore Tim Boeni stood anxiously awaiting his turn in the long jump at Saturday’s Penn Invitational at Franklin Field. When his turn finally came, Boeni sprinted toward