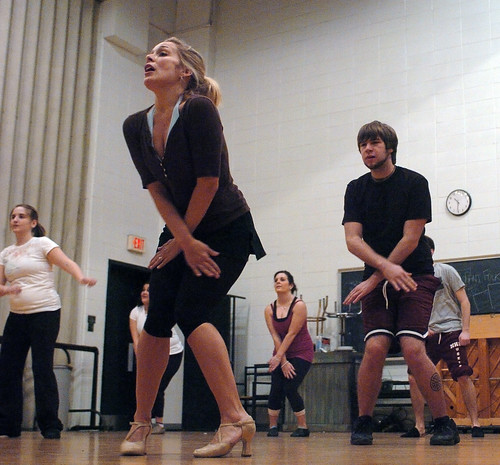 For high school senior Maria Konstantinidis, it’s more fun to be in the scene and break out into song. That’s why she auditioned for the theater department’s new concentration in musical theater.

The theater department held two auditions throughout March to determine which students will be admitted into the concentration for fall semester. Along with freshmen, high school seniors were also invited to audition. The department will also be offering a concentration in directing.

Konstantinidis explained why she prefers musical theater as opposed to straight plays.

“I love the expression and the passion of it,” Konstantinidis said.

The musical theater concentration will accept a maximum of 18 students, but may admit fewer. Professor Peter Reynolds, head of the concentration, sat on the panel of judges for the auditions. The panel included the director of movement and Temple graduate Nina Fluke as well as a representative from the acting department.

Reynolds wrote a proposal for the concentration during fall 2007, which was voted on in March by the university. Professor Roberta Sloan, theater department chair, explained who needs to approve these concentrations before they become available.

“At the School of Communications and Theater, if you wish to develop a concentration, it must be approved within your department’s curriculum committee and then submitted to the SCT faculty council. Once that happens and is approved by the dean, it goes to the Office of Academic Affairs. They are very helpful in working out the details. Eventually it goes to the Temple Board of Trustees for their approval before it becomes a reality. There is a lot of thought and quite a bit of paperwork.”

Reynolds said the University of the Arts is the only other school in Philadelphia that also offers a musical theater concentration. In order to succeed in musical theater, one must be a “triple threat,” or someone who has mastered singing, dancing and acting. The musical theater major at Temple will include classes in dance, acting and vocal performance, as well as a liberal arts curriculum.

“It is just a very unique degree anyway because you are actually majoring in three different things – acting, singing and dancing, all of which must be at top-notch level in order to have a career in theater.”

As for the directing concentration, things are a bit different. Professor Dan Kern, head of the directing concentration, explained that there is no official audition or application process at this time. While this is quite the contrast to entering the musical theater department, Kern explained that directing is not as competitive as acting or musical theater. Kern expects an estimated eight students to enroll in the program during its first year.

“I doubt seriously that it would exceed that level,” Kern said.

Kern explained that this is because directors should “understand the dynamics of human behavior,” which should, in turn, make them better directors.

Lauren Hard can be reached at lauren.hard@temple.edu.

Cheerleading ‘flexibility’ just too sexy for my tastes

The only people more important than cheerleaders at center stage of a college sporting event are the teams, the coaches and the referees. A cheerleader’s job is to cheer all game. No matter the deficit.

Norene’s homer not enough in losses to Saint Louis

AMBLER — Coming off their first Atlantic Ten Conference win of the season and a seven-day lay-off, the women’s softball team returned to action against Saint Louis Sunday at the Ambler Sports Complex. The forecasted