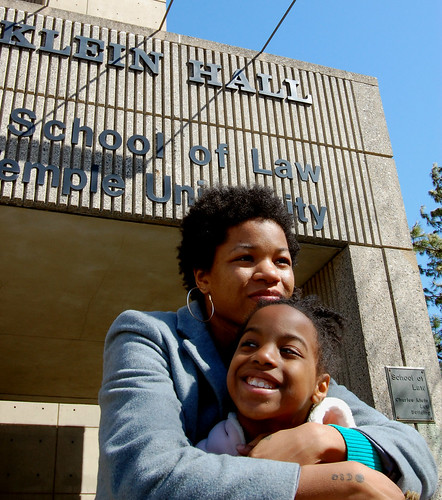 Rasheedah Phillips found out she was pregnant when she was 14. She had always dreamed of being the first in her family to attend college, but as a single teen mother, the odds of achieving that goal seemed slim.

Many people would have written her off then and there, not believing that she would be able to graduate high school, let alone graduate from Temple with a bachelor’s degree in criminal justice in 2005.

“When I was a junior in high school, I decided I was going to go to college, finish my degree in two years and then go on to law school,” Phillips said. “And I did that, but I did it in three years instead.”

Phillips – now in her third and final year at Beasley School of Law – will graduate this May. Her daughter, Ayonna, is 9 years old.

While many students have trouble juggling the stress of  college life on its own, adding a child to the mix can make the task seem impossible. But extraordinary circumstances sometimes bring out the best in people – and Phillips is no exception.

“I was discouraged for awhile, but I knew I was intelligent and I knew I still had the drive and ambition to go to school,” Phillips said. “A lot of it was me wanting to have stability for my child and that I needed to provide for her, and knowing that I wasn’t going to be able to do that with simply a high school diploma.”

Not only does Phillips balance schoolwork, a part time job and time with Ayonna, she also works as a co-facilitator for a teen parent discussion group in her community. She puts her studies in law and personal experiences to good use in presentations she gives at Philadelphia high schools about teen parents’ legal rights regarding custody, child support, emancipation and child welfare.

“I do a lot of work with teen parents,” she said. “I feel obligated to give back and show other teens that it’s possible to achieve this regardless of the other difficulties and challenges in your life.”

Although her success as a student and a mother comes from within, Phillips knows that others have helped her along the way.

Family Care Solutions, a non-profit organization dedicated to helping low-income families with childcare support in Philadelphia, has had a huge impact on Phillips and other single parents in their quests to earn university degrees.

Sherrill Mosee, founder and president of FCS, said she is amazed on a daily basis by the determination and perseverance of these single parents – regardless of their circumstances or their pasts they still have the will to better themselves and their families.

“Shame on us when we complain,” she said. “Some of these girls have two or three kids, but they understand and value the importance of a college education.”

Mosee is writing a book compiled of stories of young single moms around the country who have successfully balanced being a parent and a student called Professor, May I Bring My Baby to Class? She said that society needs to start giving these women the benefit of the doubt instead of stereotyping them.

“We miss out on the brilliance of some of these young women,” she said. “We usually categorize when we see a young lady with a baby or a teen mom. We just kind of say ‘OK, this person is never going to make it in life.’ We don’t focus on their potential and say ‘How can I help you get to where you want despite your circumstances?’”

Talia Barrows, a sophomore dance major as well as a mother of two, knows all too well the stereotypes that go along with being a single mother.

“You definitely get looks,” Barrows said. “I went into the book store with my kids one day, and the staff came up to me immediately and asked if I needed any help. They had no idea I was a student, they thought I was lost,” she said with a chuckle. “The stigma is there. As are the ideas about what a student is, what a student should be and what a student’s life should be like.”

As a mother and a student, Barrows ignores the stereotypes and instead chooses to embrace her situation and the respect she gets from her fellow students. As a dance and gym teacher outside of Temple, she said being a mother has taught her more than a university ever could to prepare her for life after.

“I’m a very down-to-earth person and I know that anyone could be me at any point in time and they might not know how to handle it, but that’s what life is. It’s about working through those struggles, so I hope I can inspire them in some way.”

Although many may think the deck is stacked against these single parents at Temple, Barrows and Phillips are quick to point out that just because their situations may be different than the majority of their fellow students, they don’t see themselves in any other light.

When asked, after accomplishing so much in such a short period of time, if Phillips is bothered when she hears fellow classmates complain about the difficulties of college life, she selflessly downplayed her situation.

“I really feel that everyone has their own struggles,” she said. “I know college is harder for some people in ways that it isn’t for me, so I really don’t pay attention to that. I know personally what I’m going through.

“Everybody has their own personal stuff to deal with,” she said. “I know that my own experiences have made me stronger. I know that it’s not just me that is depending on my education, it’s also my child, so I think that pushes me harder than others.”

Matt Bell can be reached at matt.bell@temple.edu.

The South Street Bridge, an 80-year-old span across the Schuylkill River, is falling to pieces and must be replaced, but the plans for its reconstruction have left much to be desired. The new bridge will

Clean City: Philly Spring Cleanup stands as an example of the enthusiasm the city needs

Philadelphia has seen a wave of grassroots action in recent months. The tepid 10,000 Men organization held a community action fair this weekend in an effort to cut crime in the city’s most dangerous areas,