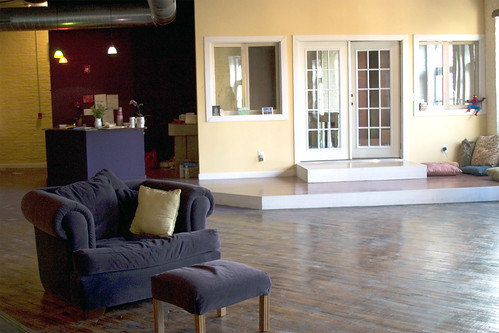 When Stephen Fisher, Angela Norris and James Peniston combined these elements, the result was Studio 34, a new creative arts, healing and wellness center in West Philadelphia. With 5,000 square feet of space, it offers yoga, Pilates and art classes to its visitors, as well as community-oriented programs. The non-lending library offers books on health, spirituality and wellness.

Through their activities, Studio 34 envisions “a community that nurtures individuals and families in their pursuit of physical, emotional and spiritual wellness,” according to its Web site.

The space – named for the trolley that runs on Baltimore Avenue, where the center is located – was founded when Fisher, Norris and Peniston realized that their respective passions work together in unexpected ways. Fisher, a yoga instructor; Norris, a practicing family nurse practitioner; and Peniston, a sculptor; have separate areas of expertise but similar goals.

Fisher had been looking for a studio to teach yoga classes, which he already provided for students from his own home. Although he holds degrees in psychology and biology and works at a biology research lab at the University of Pennsylvania, Fisher has a deeper connection with yoga and Eastern arts.

“It started with a mindful meditation class in graduate school,” Fisher said. “In time, it became more integrated into my life. I wanted to share it with people.”

The philosophy connected to the movement also impacted Fisher.

“Daoism made sense to me,” he said.

In 2003, Fisher decided to share his passion with others and became an instructor in yoga and Eastern arts, which focus on health in mind, body and spirit.

“[Yoga is] one way to help people get in tune with their bodies. It helps with losing weight, diet, alcohol abuse, smoking and more,” Fisher said. “Helps people to move off of those things, relax and have less stress.”

Norris didn’t always see herself as a business owner, but she has always wanted to open a clinic in the city.

“I used to joke around with co-workers and patients about my future clinic,” Norris said. “For me, it was a dream.”

Norris’ dream came true, but with a twist. Norris is still a full-time nurse, but she is also a dedicated yoga instructor at Studio 34. In some ways, her nursing experience has helped her teach.

“Nursing and yoga are similar,” she said. “My approach is to give people all of the information they need.”
Norris also uses her nursing experience when coaching her patients through intense yoga poses.

“I teach people to go the limit without injuring themselves. I give them specific things to think about when they’re in intense poses,” she said. “With time, they start to do these things on their own. It’s easier because they have already experienced the benefits.”

Peniston, the artist of the group, brought the concept of creativity into the healing process. As a sculptor, he has more than a decade’s worth of experience. His latest work – a sculpture of Benjamin Franklin – was installed last October at the corner of Fourth and Arch streets.

“Yoga and visual arts are both paths you take to get to the same destination,” he said. “The inner journey you take translates fairly well into yoga.”
But blending healing practices with creative art was not such an easy task.

“It wasn’t something I knew,” he said. “But the more we talked, the more it developed.”

Peniston had previously collaborated with Norris in her plans to form a clinic. They wanted to create an architecturally beautiful space to bridge the gap between arts and preventive care, Peniston said.

“Going to the doctor should not be something you do because you have to,” he said.

With three individuals collaborating to form one business, it may be hard to distinguish who does what. But the founders of Studio 34 handle it very well.
“There is a lot of blurriness. We have a lot of people who do one thing and want to contribute to other things,” Fisher said. “But independent of that, we turn to the community. We do anything we can to help them.”

Studio 34 is an eco-friendly business. According to their Web site, they believe that environmental health is key to personal and community health. Although it costs more, they use 100 percent windmill electricity and recycled paper whenever possible. Studio 34 supplies free water and tea, so they encourage people to bring reusable cups instead of bottled water.
Many people ask about the environmental friendliness of Studio 34, and Fisher believes that is a good sign.

“Multiple people inquire about our windmill energy,” he said. “By us paying a little bit more each month, more and more people will become aware of it.”
The founders of Studio 34 simply call themselves “members of the community looking to support the community.”

Developments at the College of Education

Get the grade or get off of the field

Student-athletesnot only must they focus a huge portion of their out-of-class lives on practicing their sport, but they have to balance a full-time academic schedule on top of it. And it’s not easy.