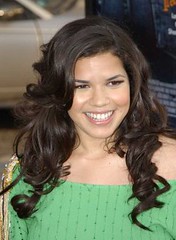 “I think Betty would definitely support Hillary. She is all about female empowerment,” America Ferrera said.

In an interview with The Temple News, Ferrera said she decided to support Clinton after watching the debates.

“I had been watching the primaries unfold in my living room just like everyone else and [was] kind of holding back, waiting to see who would pop out at me,” Ferrera said.

She has been active in the campaign since January when she first spoke on Clinton’s behalf in Nevada. Since then, Ferrera has been all over the country.

“I had the privilege of going around with Chelsea Clinton to college campuses and attended rallies with Hillary and surrogates on her behalf,” Ferrera said.

On Saturday, the actress was part of a panel at Bryn Mawr College on gender role in this election. She also attended numerous voter registration rallies in the area.

“This is a defining election for our time and especially for our generation,” the 23-year-old star said. “I want to stand up, use my voice and give my opinions.”

As part of the youth outreach portion of the Clinton campaign, Ferrera co-chairs the “Hillblazers” with friend and actress Amber Tamblyn. The two want to get young people excited and get them out to vote.

“There’s always a big thing saying that young people are swaying the vote, and then the results come back and only 47 percent of 18- to 29-year-olds have voted,” Ferrera said.
This is the first time she has been drawn in to an election.

“I went to college to study international relations and had always paid attention and been aware, but this is the first election I’ve really gotten involved,” she said.

The campaigns for both Clinton and Sen. Barack Obama are working to get as many people as possible involved in this year’s election.

Volunteers for both candidates pounded the pavement over the weekend trying to register as many democrats as possible.

Brendan Gilfillan, the regional press secretary for Clinton’s campaign, said that all kinds of people are getting involved.

“We have hundreds of volunteers coming in. We’re sending them out into the streets with information on how people can get registered and obviously [on] Hillary Clinton’s record,” Gilfillan said.

A first time canvasser and Clinton supporter, Leslie Mowat said she is doing everything she can to make sure Clinton wins Pennsylvania.

On the Obama side, supporters arrived from all over to get the vote out. Matt Brown came from New York to canvass in South Philadelphia for the junior Illinois senator.

“I haven’t felt hope from a politician for a while. Honestly, the last time I felt this inspired by a politician was probably Bill Clinton, but in ’92,” Brown said.

Damon Roberts, neighborhood leader in South Philadelphia for Obama, echoed the idea of the senator’s inspiration.

“What we’ve found all across the country is that Barack Obama has been able to get new people into the voter rolls because people are really excited about a great candidate for the first time,” Roberts said.

“Pennsylvania’s the battleground state,” Brown said. “I feel like if Obama can do big here, that’ll quell the whole thing and the primary race.”

Just four days before the April 22 primary in Pennsylvania, Democratic presidential candidate Sen. Barack Obama made another campaign stop in Philadelphia. This time, the turnout was higher than expected. Frank Friel, director of security

Sen. Hillary Clinton, D-N.Y. held a rally at Temple in McGonigle Hall during Spring Break. Some think it a staged act that speaks to her broader campaign.

After 22 months of presidential campaigning, supporters of President-elect Barack Obama are celebrating the nation’s turning point in electing its first African-American president.