Just more than one year ago, America lost one of its finest writers – one of the world’s finest writers – of the 20th century.
Kurt Vonnegut’s death on April 11, 2007 did not exactly come as a shock – he was, after all, 84 years old. For many of Vonnegut’s readers, however, facing a world in which this extremely prolific writer’s prose is no  longer featured regularly still seemed a rather dire fate.

Such readers can now take heart, as the one-year a nniversary of Vonnegut’s death was marked by the publication of Armageddon in Retrospect, a posthumous collection of Vonnegut’s previously unpublished work on the topic of war. While the book – as many posthumous collections are – is a bit varied in quality, it remains a must-read for Vonnegut aficionados interested in better understanding his growth and development as a writer.

Armageddon in Retrospect, like many of Vonnegut’s collections, is a smattering of different things. Speeches, essays, letters, fiction, an introduction by the author’s son and color plates of the elder Vonnegut’s artwork fill this relative 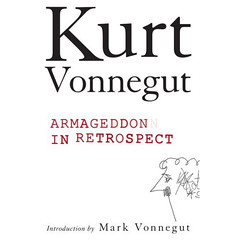 No chronology of any sort is provided, but most of the nonfiction and art collected in Armageddon seem a bit more recent than the fiction. Many of the short stories appear to be extremely rough drafts and false starts to Slaughterhouse-Five, the 1968 novel that would catapult Vonnegut to literary fame.

Dealing with Vonnegut’s experience as a prisoner of war during the Allied firebombing of Dresden, Germany, during World War II, these stories show traces of the experimentation that would eventually yield the revolutionary Slaughterhouse-Five. Although none of these stories pack either the literary or emotional punch of that novel, they do offer readers the chance to experience the gradual evolution of Vonnegut’s approach to the topic, and make Armageddon a fitting companion piece to the more mature Slaughterhouse.

Although Vonnegut’s early fiction reveals an author struggling to find his voice, all the elements that would later make that voice so identifiable – the wry wit, the humanist tone, the great facility with still-accessible language – are present in this collection. Indeed, though, these stories may not read quite like Vonnegut, they are at least proto-Vonnegutian, offering glimpses of the master their author would become. And throughout all of Armageddon in Retrospect, from the earliest story to the last speech the author ever composed, runs the note of cynical humor that made Kurt Vonnegut such a fitting spokesperson for our time.

“How should we behave during this Apocalypse?” Vonnegut asks in one speech. “We should be unusually kind to one another, certainly. But we should also stop being so serious. Jokes help a lot.”

Thank you then, Kurt, for 84 years of helping out a lot.

The search for the next best Hooters

For everyone who has ever wondered what it would be like to be Temple’s mascot, Hooter the Owl, or thought that it’s something they’d be good at, this could be your big break. Much like