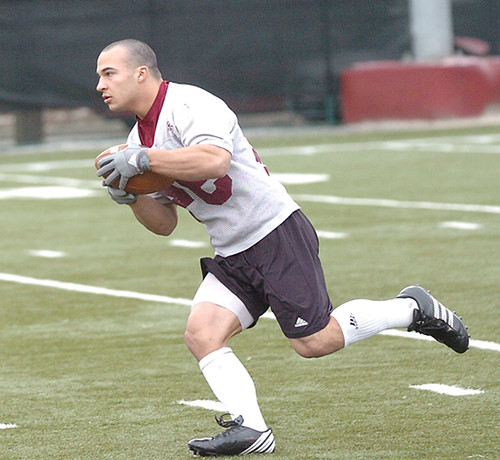 With all the hype surrounding the men’s and women’s basketball teams during the last week as they both reached the NCAA Tournament, it’s been easy to overlook what’s been happening at Edberg-Olson Hall.

The Owls, along with third-year football coach Al Golden, kicked off spring practice last Tuesday at the team’s practice facility.

Golden’s squad is returning all but one starter, but if he wants to lead the Owls to post-season play like his counterparts, basketball coaches Fran Dunphy and Dawn Staley, he said he knows the team has room to improve.

“We have so many specific goals in terms of overall approach,” Golden said.

Golden said he has one specific focus for improvement — the running game.

“We just want to see if we can run the ball,” Golden said. “That’s one of the things we’re trying to find out this spring.”

Golden said the starting running back position is wide open, but the issue is cutting his options down to three or four open spots on the depth chart.

“[We have] three or four scholarships guys here right now this spring,” he said. “There’s a minimum of two coming in. They’ll be six or seven guys fighting to be in the top three or four to make the bus next year.”

Junior Jason Harper, who had seven starts at tailback last season, is vying for one of those positions. Harper rushed for 586 yards and five touchdowns in 2007.
Golden said Harper has some inconsistencies to work out.

“He’s got to develop the mental and physical toughness required to be a Division I tailback. It’s not an easy position. It’s a position that requires tremendous focus and discipline,” Golden said.

The coach has little to worry about with quarterback Adam DiMichele.

The senior is recovering from surgery that fixed his fractured tibia. DiMichele’s season ended on Oct. 20 when he was tackled in the Owls’ win over Miami (Ohio) at Lincoln Financial Field.

“He’s way ahead of schedule,” Golden said. “He’s going to throw for us in the spring which is something that we didn’t think was going to happen a couple months ago.”

The defense is led by two All-Mid-American Conference selections — junior defensive tackle Andre Neblett and junior defensive back Dominique Harris. The Owls led the MAC in five defensive categories last season including total defense and were first in the nation in red-zone defense.

The Owls started 20 freshmen, several on the defense, last year to lead the nation.

Golden said the experience was important, but added that the current freshman class could be even better.

In the off-season, Temple signed the top-rated recruiting class in the MAC, according to Scout.com.

“They should all utilize their experience from last year,” he said. “That’s one of the greatest benefits of playing freshmen. There’s more competition right now than there was at any point last year.”

Golden posted a 1-11 record in his first season at Temple. Last season, their inaugural in the MAC, the Owls won four conference games to finish with a 4-8 record.

A three-win improvement for Golden was satisfying, especially with 2006’s record, but he said he is expecting the gradual improvement to continue.

“I think we’re on schedule,” he said. “We’ve got some tough tasks ahead of us. We have a tough schedule ahead of us this year. That’s what we’re getting ready for this year.”

The Owls will conclude their spring practices with the annual Cherry and White intra-squad scrimmage Saturday, April 19, at the Ambler Sports Complex.

Pressure and stress no match for DiMichele

With his senior season underway, the Owls’ team captain isn’t worried about all the newfound attention that comes with his team’s higher expectations.