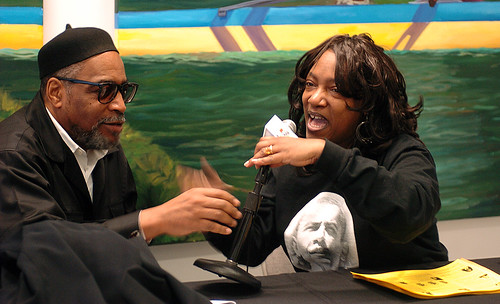 The call for black men in Philadelphia to make a real difference was answered during a community action fair, hosted by “10,000 Men: Call to Action,” at the city’s school district headquarters building last Saturday.

The fair, a direct follow-up activity to the 10,000 Men event held in October 2007, featured more than 40 volunteer organizations seeking to recruit men to build a stronger adult male presence throughout communities in the city. The fair was a part of the group’s movement to encourage mentoring, town watch and neighborhood beautification in areas affected by unwanted and illegal behavior.

Kenny Gamble, chairman of 10,000 Men, said the fair is the first of many events the organization plans to host to increase volunteerism and mentorship among men in black communities.

Gamble said the majority of incarcerated young black men come from fatherless households and may have never known their fathers.
“We have to break that cycle from slavery where the family was so dispersed everywhere that the responsibility of raising children was not something that was really being heavily considered,” he said. “10,000 Men is an effort to increase awareness and responsibility for African-American men.”

Last October, more than 2,000 men agreed to volunteer as peacemakers to reduce crime in communities by visibly patrolling streets plagued by criminal activity. Despite concerns regarding the lack of visibility in local neighborhoods, Gamble said that street patrollers are active.

“We’ve been out in the streets, and we’re working along with other organizations,” he said.

Murders in Philadelphia are reportedly down by 25 percent. There have been 71 murders this year, compared to 103 at this time last year.

During the spring and summer months, a season where crime expectedly increases, the group’s peacemakers will increase their patrol efforts.

“The African-American community probably has the worst relationship with the police department. Police always have been looked upon as the enemy of our community,” Gamble said. “What we’re doing is working along and improving the relationship with the police, because we are not a group that can arrest people, we’re peacemakers and we’re trying to create a different kind of presence in the community.”

“More police officers are not going to make a difference. We have to become mentors and tutors to our community. If we all get involved in a holistic way, instead of leaving everything to law enforcement, then we can make that difference,” Johnson said.

Education has proven to be the group’s primary solution to addressing problems associated with crime.

“Violence is traced right back to education,” Gamble said. “Most of the people in prisons did not take education seriously and they were dropouts. When you look at unemployment, it is directly linked to education.”

In partnership with 10,000 Men, the School District of Philadelphia was among the leading organizations at the fair. James B. Golden, Jr., the chief safety executive for the school district, said students have to learn how to non-violently resolve conflicts.

“It seems that in our society, young people today are very quick to attempt to resolve conflict in violent ways. I think the most important thing for us to do is to teach them how to do that in non-violent ways,” Golden said.

Golden oversees the operation of the school district’s police division and works with Temple’s police to provide a safe environment for students living in neighborhoods surrounding Main Campus.

“The efforts here today and the efforts that we make each and every day is to really go beyond safety and to engage young people one on one in the role of a mentor, or coach, or someone who can really inspire them,” Golden said.

The South Street Bridge, an 80-year-old span across the Schuylkill River, is falling to pieces and must be replaced, but the plans for its reconstruction have left much to be desired. The new bridge will

Submitted by Michael N. Price With the Pennsylvania primary quickly approaching, both Democratic candidates are doing their best to avoid a disastrous political slip-up that could cost them the all-important April 22 vote. Both Sens.