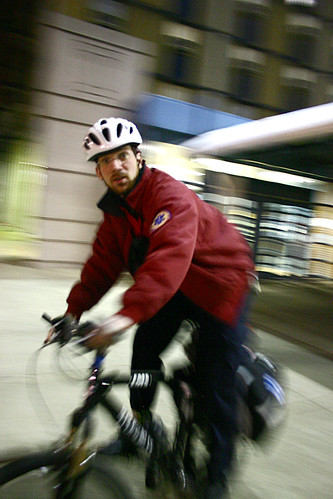 After too many swigs from the bottle, some students dial only the more familiar numbers in their cell phones. Many of them don’t know that they can also contact Temple’s Emergency Medical Services – without harming their disciplinary reputations.

The school’s student code has an amnesty clause that withholds punishment from any student seeking medical treatment for the effects of drug or alcohol use. That amnesty is also granted to the person seeking medical assistance for his or her friend. But EMS member and senior architecture major Paul Grodziak said that some students simply aren’t aware of the clause.

“We see a lot of people that are drunk and heavily intoxicated to the point that they can’t walk, and they refuse treatment just because they’re afraid of what the law might do,” Grodziak said. “People start saying, ‘What’s the deal if he’s underage? Are the cops going to come or are you guys going to arrest him?’”

Grodziak added that while the school’s amnesty clause has been in place for two years, Temple’s EMS program has only been established for about two months.

“People don’t know who we are,” he said. “If we ride by and people see EMS on the back of our jackets, they say, ‘What’s EMS?’ And because we’re so new, it’s going take a while for people to recognize that if you call us, we’re not going to arrest you.”

The organization will increase its presence on campus during Spring Fling on April 15, when it plans to set up a first-aid tent with water and patrol campus for 25 straight hours. Spring Fling has historically been one of the busiest days of the year for hospital transports and medical calls.

With additional membership this spring, Temple EMS may add Saturdays to its Thursday and Friday shifts, and organizers expect to triple the group’s membership by fall. In the meantime, senior entrepreneurship major Peter Seltzer said he has seen a better connection between students and the organization compared to traditional emergency responders or law enforcement officials.

“A lot of times you see some big guy in an officer’s suit, and you don’t want to deal with him,” Seltzer said. “But it’s like ‘Hey, man, I’m in political science with you,’ or, ‘I know this person from this frat house,’ and students say ‘Oh, OK. We know you.’”

Seltzer added that recognition has brought a personal component to treatment.

“When students are in medical need, they’re very emotional and they need Temple University to have a face,” he said. “In a school of 30,000 students, you don’t normally think of Temple connecting with you. But we’re able to be that face.”

Grodziak said that some students are responding to student-run medical care.

“They don’t let their guard down more easily, but they’re more willing to cooperate,” he said. “The more that you cooperate in a medical emergency, the better we can treat you.”

Heavy competition in the trenches

Only eleven days away from its annual Cherry and White game, several football players are aiming to secure an open spot on the team’s depth chart before the intrasquad contest kicks off. The offensive line

The misconceptions and stereotypes that cloud the reputation of street art are quickly becoming ideas of the past, thanks to one man and his store. Eric Cohen is the owner of Rarebreed, a store dedicated

With gloves, garbage bags and brooms in hand, students headed out in the community to partake in the citywide Philly Spring Cleanup.