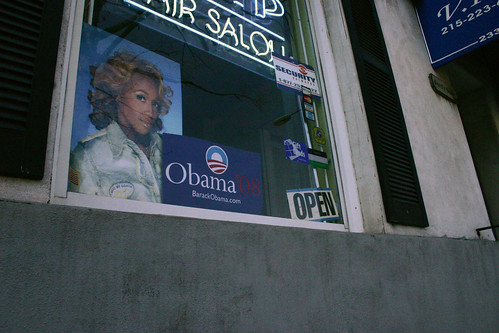 For some people living in North Philadelphia, it may seem like the American dream is dead.

Yet, many people have not given up on the idea that the country can redeem itself, even though they have learned through history to be cautious and often skeptical.

This mindset seems to be behind many North Philadelphians’ attitudes toward politics, including the upcoming election. Many residents and store owners said there could be change, but that didn’t mean they were ready to flock to the voting booths and declare a new era of prosperity and understanding.

“People don’t want to change,” said North Philadelphia resident Jesus Vargas. “They ask, ‘Who are you to change me?’”

Vargas said he believed the nomination of Sens. Barack Obama or Hillary Clinton could stir up racial or sexist divisiveness.

“The black and white thing goes back ages,” he said. “Martin Luther King, Jr. is dead, and he only changed a little bit. What can Barack Obama do to change the way it is? I don’t think much will change.”

Just the same, Vargas said he’s rooting for Clinton. His support was drawn not so much from her platform or campaign, but the fact that she was a woman.

“They should give her a chance,” he said. “We’ve had the same for so long.”

Even for some North Philadelphians who distance themselves from politics, hot-button issues can still hit home. Armir Akhen, owner of a furniture loaning store on Broad Street, said a “world-rich” country such as the United States has no reason to provide such poor healthcare.

“I have three kids and a wife,” he said. “I can’t afford this healthcare.”

Some North Philadelphians are most concerned with the war in Iraq.

Jim Kim, owner of a hardware store on Cecil B. Moore Avenue, served in the South Korean army before he immigrated to the United States 25 years ago. His opposition didn’t come in criticizing policy or executive decisions, but in recounting how he lost childhood friends during his own time in the military.

“I didn’t get hurt, but I had friends who did who lost their lives,” Kim said.

For the most part, though, he stays out of politics.

“I don’t think about it too deeply,” Kim said.

He also hasn’t talked much about the election with either of his two sons, who are studying at Virginia Tech and West Chester University.

“You know how college kids can be,” Kim said. “They don’t usually care about that stuff.”

But walking through North Philadelphia, it seems like many people do care – for Obama, at least. It could be difficult, if not impossible, to find a poster for any candidate other than him. Green or blue Obama posters can be found in the windows of barbershops and corner stores on most streets.

However, the posters paint a more confident picture than may actually exist. Ron Redmond, owner of New to U-2 barbershop, allowed Obama campaign workers to put up signs in the window of his shop, but said that he is still undecided between Obama and Clinton. Either way, he said he feels as though either candidate would be capable of leadership.

Even though he is still undecided, Redmond allows himself to be cautiously hopeful about the difference Obama could make if he got in office.

“Who knows, it might make a difference if it can change people’s attitudes,” Redmond said. “They could start believing in their neighborhoods.”

With only days to go before the Pennsylvania primary, one question remains – can North Philadelphians salvage the American dream? Kim said they can.

It is valuable that the university and community are protesting for gun control.

The Editorial Board encourages students to donate to Jenna’s Blessing Bags to honor her life.

The Editorial Board calls on students to adhere to social distancing guidelines while recognizing the inherent danger of returning to in-person classes.