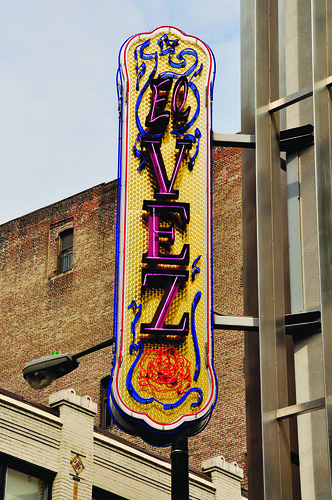 COLIN KERRIGAN TTN The bright sign at El Vez reflects the restaurant’s flavorful offerings, which include guacamole, nachos and hamburgers.

Mexico is calling loud and clear at El Vez, Steven Starr’s critically acclaimed Mexican “feast-esta,” with the largest variety of tacos in Philadelphia.

Whether you’re a fan of chicken, beef, pork or seafood, you’ll find flavorful creations at El Vez that will have you asking your friends for a bite of their dishes.

Considering the food’s high quality and the restaurant’s Center City location, El Vez offers quite a bargain – an average meal costs between $20 and $30.
Not only is the food exceptional, but with the restaurant’s bright lights and casual outdoor seating, El Vez also lures in passersby looking for a good time. Inside, Día de los Muertos, or Day of the Dead, decorations cover an entire wall, and other décor pays tribute to the award-winning Latin musician and female actor, Charo.

But El Vez isn’t just about great food: Some go to the restaurant to enjoy a drink at the large center bar, where patrons can soak up the Mexican-American atmosphere.

For those looking to find a place that shouts “fun,” and satisfies their Mexican cravings, El Vez will not disappoint.

Chelsea Wargo can be reached at chelsea.wargo@temple.edu.

Tokyo’s ‘visual kei’ is all about looks

Dear Editor, I am delighted to welcome you to Temple University’s 2010-11 academic year. The energy and enthusiasm of Temple’s students is one of my favorite things about this wonderful university. Students are an incredibly

As more than a typical convenience store, Fu-Wah prepares a killer tofu hoagie.