As more than a typical convenience store, Fu-Wah prepares a killer tofu hoagie. 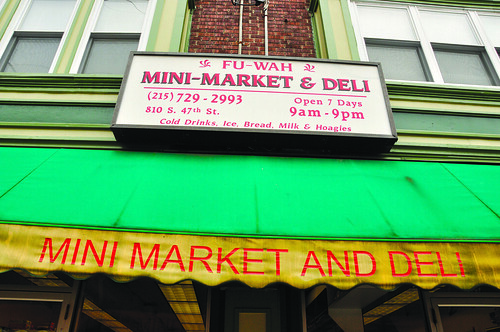 As famous as South Philly is for cheese and grease, West Philly has gained popularity for its non-Western cuisine. Indian and Ethiopian eats are at their peak in this part of the city.

But the one sandwich that has made West Philly a prime destination, even for West Coast natives, is the tofu hoagie at the Fu-Wah Mini Market at Baltimore Avenue and 47th Street.

You can find this modern rendition of the Vietnamese bahn-mi at other hole-in-the-wall locations in Philadelphia, but Fu-Wah’s reigns supreme.

The succulent tofu is soaked in Vietnamese sauces and Sriracha then nested in a soft, white hoagie roll and topped with shredded pickled daikon root, carrots and fresh cilantro. This miracle goes for only $3.80.

Fu-Wah also caters to the omnivore by offering more common hoagies with deli meats and cheeses.

Also a corner store, locals can find the kitchen basics: milk, produce, eggs and the like. Organic and veggie-friendly options are also available.

Students should visit this vegetarian mecca at least once during their time in Philadelphia. Let the Fu-Wah tofu hoagie, or “toagie” as one fan called it, be the ultimate cheesesteak alternative.

Sarah Sanders can be reached at sarah.sanders@temple.edu

For reggae rock band, one gigabyte is enough