Alyan’s delivers the flavors of Middle Eastern culture and food on a dime. 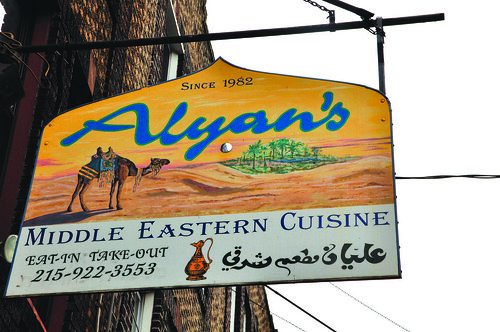 COLIN KERRIGAN TTN Transport yourself to the Middle East via the menu at Alyan’s, a quaint establishment located off South Street at Fourth Street.

Unless you’re traveling for the sights, there’s no need to fly halfway around the globe to enjoy delicious Greek and Middle Eastern cuisine. Alyan’s, at Fourth and South streets, offers quick yet pleasant service in a cozy, casual setting.

Alyan’s is best known for its tasty hummus (a mashed chickpea spread), the falafel (a fried chickpea patty) – which, critics claim, is one of the best in Philadelphia – and crispy french fries mixed with hot peppers and onions.

If chickpeas don’t wet your taste buds, the Alyan’s Mixed Grill will. It’s a large platter with skewers of tender meats, including lamb, beef and chicken, served with Tahini sauce, tomato sauce, hummus and pita bread – all for $12.75.

Alyan’s menu also includes couscous, rice and grilled zucchini, along with sandwiches starting at $5, lentil soups for only $3.50 and three types of well-portioned salads.

The restaurant provides in- and outdoor seating, as well as a private room for parties. The brick walls, Persian rugs, lanterns and pictures of various Middle Eastern cities offer patrons the feeling of traveling overseas.

When the banality of campus food becomes too overwhelming, head to Alyan’s for the ultimate Middle Eastern dining experience.

Iris Still can be reached at iris.still@temple.edu.

Get your ‘feast-esta’ on at El Vez

Tokyo’s ‘visual kei’ is all about looks