Larry Lemanski already has a Temple lapel pin. It comes free when you shake the foundation of professorial research at a university.

The man with the thick gray goatee joined Temple on Dec. 1, ditching a stint he had Florida Atlantic University. In a November interview with the Temple News, President Ann Weaver Hart was awfully excited for him to join the party. Now we get to find out why. 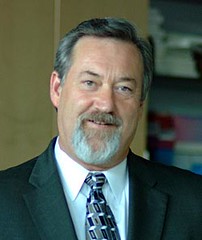 At FAU, Lemanski was that university’s first vice president for research. He has come to Temple to replace Kenneth J. Soprano, who has expressed interest in focusing his attention on teaching. As senior vice president for research and strategic initiatives, Lemanski will be charged with coordinating research grants and further developing Temple’s culture of academic exploration.

It’s nothing unseen in the Hart administration. When Hart was introduced in May 2006 as the university’s ninth president, she was called a master fundraiser. She has gotten right to it.

While it began before her tenure, it was she who announced the public phase of a $350 million capital drive campaign. We’ve seen a Temple ‘T’ media blitz, a commitment to the school’s foreign campuses, and a devotion to the football team remaining a Division 1-A program, now known as the Football Bowl Subdivision. Admissions application totals and student enrollment are growing.

These are all fiscal decisions chronicling Temple’s recent surge in size and prestige. The growth is explosive, so the fall back will have to be sudden. Temple can’t run a sprint forever.

I don’t think this university needs the type of development Lemanski saw at Florida Atlantic – where he launched its research department and in five years tripled funding to $90 million, as reported by The Temple News. But that’s hardly the tune everyone is singing.

“Over the next five years, I think that we can accomplish tremendous amounts,” Lemanski told The Temple News. “I expect to be able to see the university doubling in funding during that period of time.”

In her November sit-down with The Temple News, Hart seemed positively giddy about Lemanski joining staff. It’s not about his knowledge of anatomy, a subject he has expressed interest in teaching at the school of medicine.

Her excitement is about Lemanski’s documented ability to bolster university research. Something in which Hart, in her fundraising zeal, has intense and personal interest. No one can argue with attempts to further raise Temple’s profile as a respected research institution, but Hart’s first two years have ridden an impressive momentum surrounding this university. The sustainability of that energy and development needs to be questioned, Lemanski’s shake of the status included.

Re: Temple students and the North Philadelphia “renaissance”

Dear Editor, Temple has experienced unprecedented growth in the last decade. While that growth has resulted in a stronger, academically richer university, it has also presented challenges that must be addressed. Let me explain how

A new Center for the Arts and School of Media and Communication, will be created effective July 1.

If there are images in this attachment, they will not be displayed. Download the original attachment Transcript of Interview with President Ann Weaver Hart Q: How are you acclimating yourself to Temple, how are you