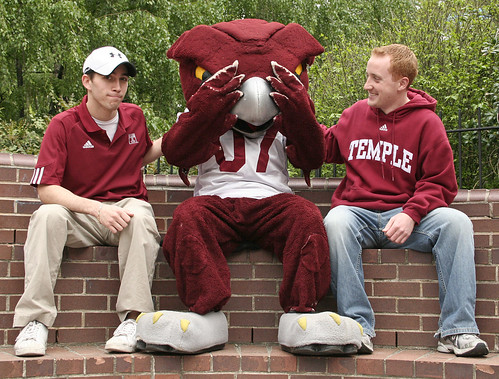 For everyone who has ever wondered what it would be like to be Temple’s mascot, Hooter the Owl, or thought that it’s something they’d be good at, this could be your big break.

Much like a rare comet or eclipse that only occurs every few years, the position of being Hooter the Owl is open, but only briefly.

Richie Blyweiss and Erik Johnson – both seniors and mascot coordinators – graduate this May, leaving the position behind the suit of Hooter’s “best friend” open. Because they want to make sure Hooter is left in capable hands, they, along with a panel of judges, will be holding auditions in McGonigle Hall’s main court on Tuesday, May 6 at 5 p.m.

Blyweiss, an education major, passionately lamented on having to leave Hooter behind, telling of how being Temple’s mascot really made his college experience great.

“I’m going to miss this,” Blyweiss said. “This is the hardest interview I’ve ever done because it’s my symbol of saying that I’m no longer going to be Hooter’s ‘best friend.’ Hooter is just so important to me.”

“It was unlike anything I’ve ever done or anything I’ll ever do again,” Johnson said.

But they do find some comfort in the idea that they will be two of the judges, helping to choose their successor at the auditions.

“We’re going to have an audition process where they’re actually going to perform in the suit and after will sit down to have a personal interview with the judges, so we can make sure we get that one person who really understands Temple,” Blyweiss said.

Blyweiss and the other judges hope to pick the next person to have the same unbelievable college experience.

“Running out in front of 68,000 screaming fans really gets the blood pumping,” he said. “How many people can say they have gotten to do that?”

But Johnson isn’t fazed by the number of people he is performing in front of anymore.
“The more people, the more fun,” he said.

When speaking about what type of student the panel of judges will be looking for, Blyweiss and Johnson made a point to say that it doesn’t necessarily have to be a male, and that any full-time student is welcomed and encouraged to come out – even if it’s just to watch.

“We’re going to make sure they can make the movements and make it look real, not just a
person in a suit,” Johnson said.

“This is open to any student in the university that is willing and able to do this,” Blyweiss said. “Ideally though, we want either a freshman or a sophomore. We are going to make sure anybody that wants a shot gets one.”

The student chosen to befriend Hooter has to be able to entertain people of all ages.

“Hooter is a college kid, but he also has to be able to play around with the little kids, too,” Blyweiss said.

Not only are they looking for people to show up to try out to be Hooter, but Blyweiss also said that they welcome spectators to come down and watch the try-outs and maybe help evaluate each candidate because “Hooter is Temple University.”

“Even if people aren’t there to try out, we want as many people as possible to come out,” he said. “I want to make sure that anyone who is there as a spectator has the opportunity to come down and try out, too.”

Both of the current “best friends” of Hooter stressed that the position requires dedication.
“It’s a big time commitment, although it’s still a lot of fun,” Johnson said.

And one of the benefits of being Hooter’s “best friend” includes a partial scholarship.

“There is a scholarship opportunity, so this is a great way to help yourself out,” Blyweiss said.

“We work with the American Cancer Society, Make a Wish Foundation and the American Heart Association, just to name a few,” Blyweiss said. “Temple is really concerned with embedding itself in and helping the community.”

For those potential Hooters who may be a little nervous, Blyweiss said you just have to take a shot at it.

“If you don’t take it, you will never have that chance again,” Blyweiss said. “Hooter gave me that experience, Hooter made me grow up. A little piece of you stays with that suit, there’s just no way to explain that rush you get in that while you’re in that suit.”

As students, we’ve all been in the situation before: the stress of end-of-the-year papers, projects and upcoming finals is exacerbated by those annoying group projects. There’s that one member who bails every time the group

When it comes to the improvement and expansion of Main Campus, students tend to focus on housing and technology. But academics – the real reason you’re paying tuition – often go ignored. Journalist and professor

Events of today too current for Hollywood flicks

One man can’t elicit much change. But I elect to help by giving Tinsel Town somewhat uninteresting storylines based on actual events to appease the masses.