TOKYO – I never listened to much music as a kid, but when I discovered Japanese rock music as a freshman in high school, I was hooked. Besides photography, it was the underground Japanese music scene that drew me to study in Tokyo.

As conservative as Japan is, with respect and conformity historically being of great value, Tokyo is a fantastic place for specialized music and fashion to flourish, if only because of its size.

Think about it: 8 million people live in the city of Tokyo, 13 million in the prefecture – basically a state – of Tokyo and almost 40 million in the metropolitan area. 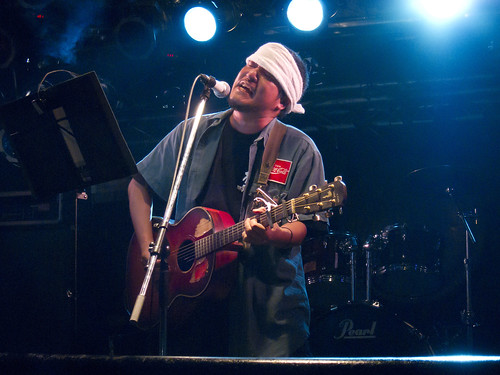 If one-tenth of 1 percent of Tokyo likes your band, you have 40,000 fans. If only one-hundredth of 1 percent likes you, that’s still 4,000 fans. If you can get 50 or 60 of those people to turn up to a show, which isn’t difficult in a country that has one of the best rail systems in the world, you can be a touring indie act. You can even have a full tour and never leave Tokyo.

So basically, any possible kind of music you could want is here, and it’s live at a venue – known as a “live house” here – near you. Pick any genre, and you can probably find a couple shows each month that you’d enjoy.

Even if you are a chip-tune fanatic or really love Brazilian bossa nova, you’re set. If you love transvestites and cross-dressers that can slay like Yngwie Malmsteen, you’re set. Sadly, for me, if you really like boy bands, you’re completely set.

I settled into the indie side of things, loving various glam, goth and industrial bands during the last decade that tend to get lumped into the pseudo-genre called “visual kei.” Japan is really bad at the concept of genres, so trying to find a CD in a mainstream music store is usually maddening.

Stores frequently have three sections: “J-pop,” “enka” and overseas stuff. Hardcore metal can sit next to a 14-year-old pop idol’s CD, and no one in the store seems to think that might hurt sales in any way. So it’s no surprise that visual kei has pop music, metal, industrial and electronic all hanging out together.

The only thing that genres seem to have in common is that artists wear elaborate outfits, or even costumes, that usually relate to their lyrical theme, especially if they release concept/story albums.

However, sometimes they have no characteristics that warrant the label visual kei but are still featured in “visual” magazines.

Even Wikipedia users seem to have given up on trying to define it. Many people call it shallow, and a lot of it is, but it makes for great concerts and music videos. Visual kei is thrilling to photograph as well.

It works better this way. Aside from shopping for CDs being a pain, live shows are a great way for the culture of music to function.

Fan bases from vastly different bands mingle at music- and fashion-themed parties, and it’s not weird for someone to like an obscure metal band that features one or more transvestites, as well as Japan’s pop queen, Ayumi Hamasaki.

It’s not uncommon for unrelated genres to play the same shows, and not just big, multiband ones. To promote their major debut album, members of a symphonic power metal band called Versailles toured with a pop-goth electro singer named Kaya as their opener.

Looking at the party scene, Tokyo has some wild ones.

While you’d think the city’s trains shutting down at midnight would kill the party atmosphere, it actually creates a scenario where, because the first train doesn’t come until 5 a.m., people are going to party until 5 a.m.

Some parties are monthly events that revolve around this culture of elaborate outfits and feature visual kei bands more often more than DJs as the all-night entertainment.

Audiences wear the most detailed costumes they can muster, so it’s easy to see why outsiders might view the scene as some secret society. But the people at these parties seem to be more concerned with having a good time than being judgmental.

Lee Miller can be reached at lee.miller0001@temple.edu.

Please your every tastebud with a trip to Kilimandjaro

Yesterday, officials recommitted to the Tokyo campus in light of the recent tragedy. Just less than two months since the 9.0 magnitude earthquake struck Japan, the university held a ceremony and teach-in to re-affirm its