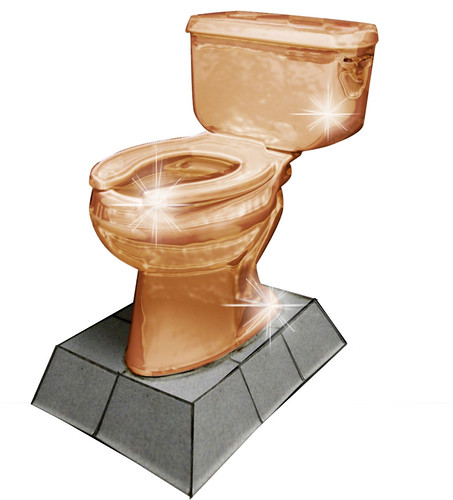 To pee, or not to pee: that is the question.

There are few things that are more uncomfortable than needing a restroom in public. Many businesses only offer their bathrooms to paying customers, while some public toilets are just plain disgusting. So what’s a person to do when she is stranded outside with no place to pop in for a quick bathroom break?
Philadelphia hosts some of the most amazing bathrooms around, made unique by their graffiti-laced walls, mosaics, peek-a-boo stalls and peek-a-boo windows. When you’ve got the urge to go, here are a few places worth your time.

The Bean Café
“Jackie’s sorry.” To whom it may concern, please forgive her. She really means it. Jackie even wrote it on the walls of the bathroom at South Street staple The Bean Café. This hip, artsy coffee shop is as famous for its toilets as it is for its drinks – the walls of each unisex bathroom are covered with stickers, graffiti and clever, Sharpie-written notes.
While at The Bean, grab a cup of joe, sit and read, or people-watch by the large window. Then, take the time to travel downstairs and check out the PostSecret-like art that other Bean visitors have created.

“People just started writing on the walls,” he said. “We told customers not to do it, but it became pointless, so we encouraged it.”
Chalk is now offered to everyone who wishes to bless the walls with their handwriting. Don’t consider it taboo: at The Bean Café, it’s considered more of a cultural, generational norm. The bathroom does look rather disgusting and dirty at first sight (perhaps because of all of the smudged pen and marker), but it’s actually cleaned daily. So grab a pen and drink all the coffee you want – you won’t mind the trips to the bathroom.

The Continental Midtown
Ever wonder what the other sex does behind closed doors?

At the Continental Midtown, guests can sneak a peek at each other through the two-way bathroom mirrors. No, you cannot see behind closed stalls, but you can see members of the opposite sex as they wash their hands (or don’t wash their hands) and take that final check in the mirror. It’s a perfect way to see what your date is up to when he runs off to the bathroom – and whether his hygiene habits match up to your own.

Restaurant genius Stephen Starr works his magic again at the Continental Midtown, a sexy, stylish, ’60s-inspired restaurant. Much like Starr’s other restaurants, including Buddakan, El Vez and Jones, Continental has won critical acclaim – it was named one of Travel + Leisure magazine’s “Best Places to Go” and has been awarded Philadelphia CityPaper’s Reader’s Choice Awards for Best Cocktail, Best Martini Bar, Best Happy Hour, Best Sunday Brunch and Best Place to be Seen.

The décor of the Continental Midtown is top-notch, but the employees and guests must be used to it all – or pretending to be, at least.
“It’s cool, I guess” was the general response from employees and guests when asked about the very voyeuristic bathrooms. Perhaps it’s like Facebook-stalking – no one wants to admit that they do it and love it.

The Khyber
They say the Khyber’s bathroom is for lovers, so it must be pretty cool, right? If bright blue walls, a broken urinal and graffiti sound cool to you, the Khyber won’t disappoint.
The Khyber is known for its great music and great atmosphere. Local bands and mainstream artists alike can be found performing at the Khyber on any given weekend night. But aside from that, there’s no glitz or glamour at the trendy Old City bar – the bathroom gives you exactly what you’d expect (or maybe a little bit less, depending on your standards).

But unlike other urine-covered bar bathrooms, the Khyber has an interesting story to tell – how its now-infamous “The Khyber Bathroom is for Lovers” T-shirt was made. Bartender Paul Havelin said an employee created the T-shirt after a doorman had to split up a couple having sex in the venue’s single bathroom. Apparently, drunken hook-ups in the unisex space are not uncommon.

Curious about their cleaning habits? Don’t worry; the bathrooms are scrubbed every day. But you probably wouldn’t notice.
“Alcohol has a crazy effect on people. It makes them want to miss the toilet,” Havelin said.

The Last Drop
The Last Drop is a must-see for the anti-Starbucks crowd – this Gayborhood coffeehouse appeals to an “indie” mentality with an experimental soundtrack, dim lighting, eco-friendly mugs instead of paper cups, and bathrooms that are beautifully eclectic.

While the employees may look affectedly bored, these bathrooms are anything but dull. If the plastic hand hanging down from one of the ceilings isn’t creepy enough for you, check out the broken pieces of ceramic angels and children’s toys embedded in the walls. Artist Mike Smash’s mosaics cover every inch of the bathrooms and serve as a tribute to Philadelphia’s street art culture.

A fan of Isaiah Zagar’s Magic Garden on South Street? You’ll find yourself enraptured with the bathrooms’ shards of glass, painted tiles and general irreverence.

Paradigm
Don’t get caught with your pants down at Paradigm – literally. The chic Center City restaurant and bar’s “magical” bathroom doors are see-through – until you lock the door. Then the glass becomes frosted, preventing others from seeing you do your business. But after you’ve had a couple of drinks, remembering to lock that bathroom door can be a difficult task – apparently, it’s not uncommon for tipsy Paradigm guests to accidentally reveal it all.

Aside from the peek-a-boo doors, Paradigm’s bathrooms are inviting. They are spacious, immaculately clean and just as stylish as the restaurant itself. Although Paradigm shares the bathroom with sister restaurant Dolce next door, patrons of either eatery won’t mind the trip.

But don’t visit Paradigm just for the bathrooms – the four-star restaurant is hailed for its food as well as its atmosphere, which becomes rather club-like on the weekends.

Sherri Hospedales can be reached at sherri.hospedales@temple.edu.

Campaign aims to teach students to give back

For those graduating students yearning to show their class pride and having at least $10 to spare, the Class Pride Campaign could be the outlet to consider. The gift from students graduating from either the

Ken Anderson, Temple’s women’s gymnastics coach from 1986 to 2006, died on Thursday, March 20.  He was 52. As of press time, The Temple News was unable to confirm the cause or location of Anderson’s

Morris’ teammates run out of gas against Arizona State

COLLEGE PARK, Md. — After 21 wins, 13 losses and countless practices, road trips, meetings and weight room sessions, it was all over. The 11th-seeded women’s basketball team’s season came to an end Sunday in