Social anxiety is common, but when does it become a problem?

Meeting new people and forming solid relationships can be intimidating for students thrown outside their comfort zones. Being a new student at an urban university like Temple can be scary, and it can cause some social anxiety, whether mild or severe, for freshman students. 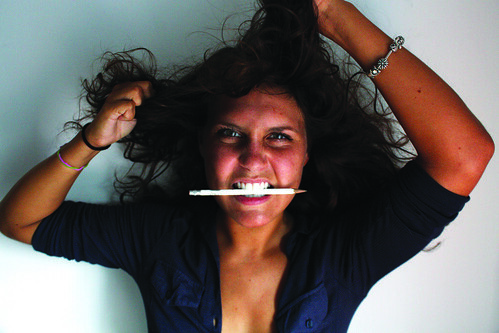 “Just think about what being a freshman is,” said Dr. Richard Heimberg, a psychology professor and director of Temple’s Adult Anxiety Clinic. “It’s coming into a situation where you’re not sure whether you’re cut out to make it. You’re worried about whether you’re going to make it in the classroom. You have no friends. It’s a factory for social anxiety.”

Heimberg advises freshmen to accept their anxiety, understand it is normal and never avoid a social situation just because it feels uncomfortable.
That is what Christa Mercurio, a sophomore kinesiology major, tried to do.

“I felt a lot of anxiety the first few weeks,” Mercurio said. “I had no idea what would happen, and because I wasn’t so popular in high school, I had no idea if people would like me in college.”

Mercurio kept the door open to her room, attended all the school-sponsored events and made some friends in the classroom.

Program Director of Orientation Rebecca Dzara said the best way for incoming students to form friendships is to “get involved.”

Dzara said she hopes freshmen will remember a certain level of anxiety is common when embarking on a “new chapter” like college and that patience is the key to forming new friendships.

Michael Montalbano, a sophomore environmental science major, was able to eventually form a large network of friends by becoming involved. However, Montalbano admits leaving his close-knit family and a high school where he was well-liked was a big transition.

“The most social anxiety I experienced was during the first few meals that I had at Temple. I didn’t know anyone, so I ate alone,” Montalbano said. “It was embarrassing, but within the first few weeks I became closer with more people.”

College parties can be another way for freshmen to meet potential friends, but they can also be basement-filled brewing pots for social anxiety. Many freshmen are not used to huge social parties, which can elevate nerves and shyness.

Sophomore secondary education English major Thomas Salvatore was new to the party setting when he came to Temple.

“Social anxiety sort of tends to follow me wherever I go, but it mostly hits me around peers in a classroom setting or simply at parties,” Salvatore said. “I was terrified because I didn’t know what to expect and simply hoped for the best.”

Drinking also tends to go hand-in-hand with parties, and mixing alcohol with anxiety can lead to a double-edged sword, which is something to be aware of, Heimberg said.

“If the person has social anxiety enough to where they feel like they need to control it, you have a circumstance where they’re going to start to drink out of need rather than the occasion where you just want to let loose,” Heimberg said. “They’re going to have two problems instead of one, so it’s something to watch out for.”

Instead of getting drunk so the anxiety fades away, Heimberg suggests that students accept and allow the nerves when they talk to new people, and eventually those anxiety-provoking situations will no longer seem so painful.

Although Abby Musial, a freshman art major, is excited to take on the independent life college offers, she said she gets tinges of social anxiety when surrounded by a crowd of people.

“Generally speaking, when I see a huge group of people, I get a strange mixture of adrenaline, nerves and curiosity,” Musial said. “This can be a deadly combo, resulting in stutters, word mix-ups and so-on.”

Her solution: reminding herself not to hold back, keeping her mind open and meeting people from all different social groups. During her freshman orientation, Musial said, she found it easiest to open up to the people around her in order to form closer bonds.

But not everyone is as outgoing as Musial, who said she thrives off awkwardness. For some, social anxiety can become more than just the normal freshman nerves.

Heimberg says there are a couple of questions freshmen should ask themselves when evaluating their social anxiety.

“If you sit down and take a hard look at yourself, are you failing to meet some of the goals you have for yourself?” Heimberg said. “And is it because you’re not taking risks in a social sense?”

Heimberg suggests having a “serious talk with yourself,” but if that doesn’t work, counseling may be the solution.

There are many resources for freshmen who may experience social anxiety. The Tuttleman Counseling Center offers free and confidential services. Plus, there’s the Adult Anxiety Clinic and many resources outside Temple.

At first, Temple’s campus can feel like a foreign country. The language is foggy, the maps can be confusing, and the cafeteria food might not taste like Mom’s home-cooked meals. But to shake those anxieties, it might be necessary to step foot in some socially awkward situations until Main Campus feels more like a second home.

Cary Carr can be reached at cary.carr@temple.edu.

With two series remaining, softball fights for spot in A-10 playoffs

Temple faces No. 21 Massachusetts and Rhode Island to finish the regular season. The Owls are tied with the Rams for the sixth and final A-10 playoff spot.

Last season, the Owls went to their first bowl game in 30 years, surprising the college football world with a 9-4 record and a 7-1 record in the Mid-American Conference. The spotlight is bigger and

New Delhi has been dishing up traditional Indian cuisine for more than 20 years.